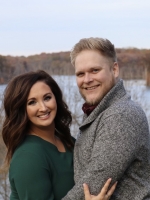 Andrew and Morgan both grew up in the Kansas City/Liberty area. They began dating in 2007 and were married in 2012.  Both have a love for travel and being with their family. Andrew enjoys sports, video games, and creating illustrations.  Morgan enjoys reading, horseback riding, and movies.

After graduating from Masters Commission Atlanta and Southeastern University, Andrew began his full-time ministry in 2007 with Morgan joining alongside in 2010. Andrew received his Ordination through the Assemblies of God in 2016.  Morgan began working as the church administrator in 2018.