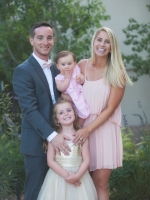 Rachael has been a part of Cornerstone since she was a child.  She has played many roles in the church over the years.  She has worked with the daycare, directed the After School Club, and led her own small groups within the church.  She now fills the role of YTH Leader.  She is a mother to three girls and one son and is married to her husband, Tyler Holloway.  Rachael enjoys running, cycling, and more than anything spending time with her children and family.